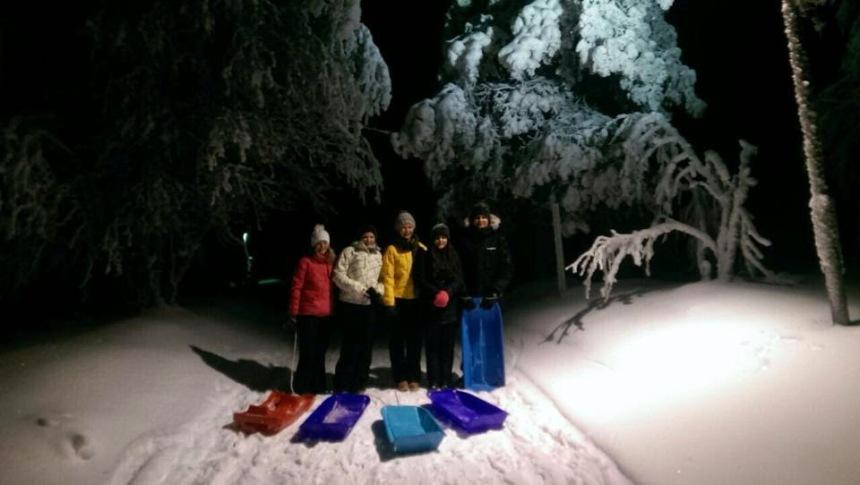 Here you can read about the adventures of some IC team members in Lapland!!

After 10 horrible hours on the narrow sleepless bus we arrive in the magical zoo of Ranua. In this lovely place we encountered several animals like foxs, beavers, reindeers, wolverines and finally the majestic polar bear. Few hours later, we left the zoo and arrive in the one and only Santa Clause´s village. All together we took a picture with Santa and spend an amazing time in Santa´s home and also crossed for the first time the arctic circle . Then we left the village and head to Saariselkä where we found our cozy and wonderfully build cottages which included sauna and all the necessary amemities.

During the second day we travelled to Norway. Bit before crossing the border, we ate the most tastiest ribs of the whole lapland . Later we arrive to cozy almost extinct fishing village of burganese where we had an awesome time in a typical tiny sauna. We rushed straight from the sauna to swim in the icy waters of the arctic ocean which had lots of therapheutic effects.

Soon after we woke up we went to the the husky safari where we drove sledge with huskies through the wilderness forest of lapland. We also met the lovely puppies and girls were spreading some tears of joy in their faces. During the afternoon we rode the snowmobile through the bumpy snowy rodes of Saariselkä. We could feel the fresh cold wind in our faces which made us feel awesome.

Day four was for energetic activities. In the morning we did 20 km of cross country skiing in only 1 hour and a half. Later on we rode the reindeer sledge and heard some fascinating and legendary stories of the saami people while enjoying some sausages. Before our last party in saariselkä, we had the oportunity to try out snowshoeing.

During our last day we had five hours of freetime which some people used to explore the village, go dowhill skiing or snowboarding, eat yummy reindeer food, bought souvenirs or went to spa and relax before our long journey back to jyväskylä.

Everybody enjoyed the trip so much that they wanted to stay longer mostly because the northern lights were too shy to appear. This was a great experience for exchange students but also for us tutors. The timetravel guides were very professional and funny at the same time, and everything was organized well. We didn’t have any big problems so we had time to have fun with each others.

Didn’t this seem like such an awesome trip? I was there last spring and it really was great! So many cool places to see and fun things to try out!

Interested? The trip will be organized again in the Spring 2015 😉